What does carbon neutrality mean?

Why does carbon neutrality matter?

"If we don't change course, we may be headed for a catastrophic temperature rise of 3 degrees [Celsius] this century. Can anybody still deny that we are facing a dramatic emergency? That is why I call today on all nations worldwide to declare a climate emergency in their countries until carbon neutrality is reached. Thirty-eight countries have already done so, recognizing the urgency and the stakes." —António Guterres, 9th Secretary-General of the United Nations

1. The entire world must achieve it soon.

The largest group of scientists ever assembled in human history is called the Intergovernmental Panel on Climate Change (IPCC). Their mandate for the entire world is that we become carbon neutral by 2050. The stakes could not be higher.

A report commissioned by the US Army found that the US military could collapse by 2030 from all of the stresses put on it by climate change. Credible voices from the Pope to the World Bank warn the climate crisis could cause over 100 million climate refugees.

Our carbon footprints have a social cost. Researchers at Stanford University found that each ton of CO2e causes $220 in damages. These damages include decreased agricultural yields, harm to human health and lower worker productivity. Low-income and minority populations pay the highest social costs of carbon. For example, according to Jacqueline Patterson, Director of the NAACP Environmental and Climate Justice Program, African American children are 2-3x more likely to die from asthma attacks caused by poor air quality.

And not everyone is equally responsible. 71% of the world’s emissions come from just 100 companies. The world’s richest 10% produce 50% of all global emissions. The environmental justice movement is gaining attention and support and champions these forgotten truths. Carbon Neutral Indiana agrees society needs to hold responsible those who cause the most damage. We also understand the current climate movement lacks ethnic and class diversity.

But many individuals, and organizations of varying sizes, are able and eager to clean up their own “carbon trash.” The average American household’s footprint is 40 metric tons of CO2 equivalences (mtCO2e). That means they are shifting $8,800 in damages onto others (40 tons x $220/ton). Those who become carbon neutral -- taking responsibility and cleaning up their carbon footprints -- honor the universal principle of “do no harm.”

These diverse solutions are a blessing in that individuals can engage where they are most passionate. They can also be a curse, however, in that they scatter our focus and increase communication silos.

According to the IPCC, the mandate is to become carbon neutral. All of these solutions will help us get there, but carbon neutrality is the north star.

Furthermore, carbon neutrality doesn’t need to be a goal we achieve in thirty years. Parts of the world can achieve it today. First small parts like households and businesses. Then larger and larger parts like cities, states, and countries. This is how Carbon Neutral Indiana raises awareness of the global goal, shows it’s achievable, and creates positive momentum.

How can my household become carbon neutral?

2. Set up a monthly subscription to clean up your footprint. It's about the price of Netflix per person.

What does it cost to be carbon neutral?

It costs about the price of Netflix per person. For a household it's usually similar to your water bill.

We all know "an ounce of prevention is worth a pound of cure." Compare this with the social cost of carbon. This describes the economic damages of putting one ton of CO2e into the air. According to researchers at Stanford University, each ton causes about $220 in damages. That means the average family is shifting about $8,000 in damages onto others, usually the most vulnerable.

So by investing a similar amount as your water bill, you can prevent a lot of damages.

And when more and more people become carbon neutral, they prevent millions of dollars in damages.

Where does the money go when I purchase carbon offsets through Carbon Neutral Ohio?

Carbon Neutral Ohio (CNO) is a nonprofit social enterprise startup. This means we generate most of our support by selling carbon offsets as a fundraiser. Similar to how Goodwill resells clothing. We’re demonstrating a self-financing, inclusive, and scalable mass movement. We help households clean up their carbon footprints and shift culture so that it’s normal to be carbon neutral.

About 40% of subscription revenue goes to educate more households. The other 60% goes to purchase verified, wholesale, negative emissions. So far, we’ve invested in forest protection, landfill methane capture, and nitrous oxide abatement. There are over 200 project types, however, including feeding cows garlic to reduce methane and shifting to regenerative farming practices to capture carbon in the soil.

We select projects based on our current knowledge of what is most effective. For example, The Oxford Offsetting Principles points out that not all tons are created equally. Right now, it’s good to invest in projects that avoid emissions (e.g. avoided deforestation). Over time, however, we need to shift to projects that remove emissions. First with short-lived storage (e.g. soil carbon) and then with long-lived storage (e.g. carbon mineralization).

See this record of all carbon offset deposits and purchases.

I live in an apartment. Can I be carbon neutral?

Yes, the process is the same as with people who live in households. You just probably won't be able to put up a yard sign. You can measure your footprint here.

We have solar panels. Are we carbon neutral?

Probably not. Electricity is just one part of your total carbon footprint. Below is am example of where household carbon emissions come from: 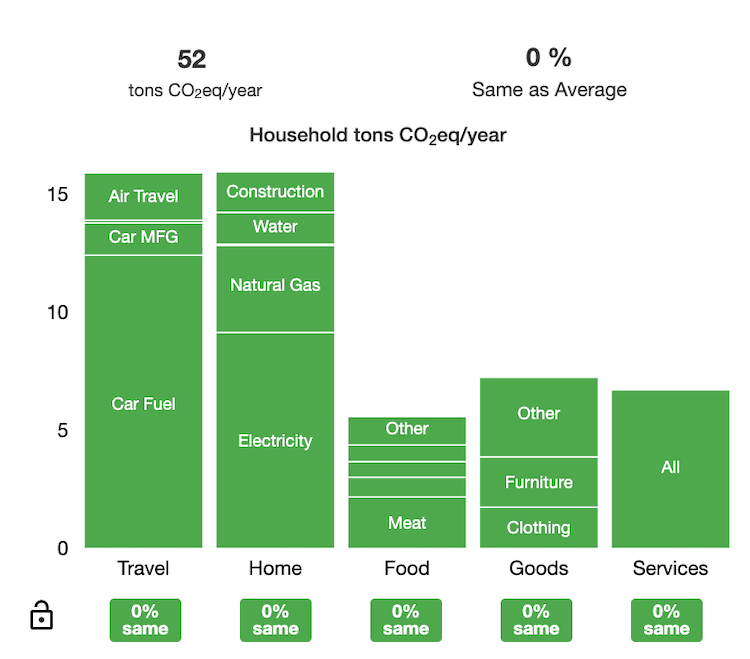 Who created Carbon Neutral Ohio and how?

How does Carbon Neutral Ohio fit into the larger climate movement?